How to setup AUFS on Arch Linux for use with SnapRAID

AUFS and SnapRAID is a completely free drive pooling and drive fault tolerance setup. Its hugely powerful but not simple to setup for a newbie. This post will explain how to set them up and build a high performance NAS server for your home using all free and open source software. What is AUFS? What’s SnapRAID? Don’t worry, all will be explained…

As you may know, I’ve been an unRAID user for some 3+ years. I’ve decided to move from unRAID to increase the freedom and control I have over my file server. This post is in part, a chronicle of switch from unRAID to SnapRAID.

I used Arch Linux as the OS here, but most of the configuration files posted here will drop quite happily into other Linux distros. The major exception will be mounting AUFS via systemd as not all distros use systemd yet. With that in mind, let’s begin.

Copying over gigabit ethernet from Windows to AUFS via SMB. Like the look of these speeds? Read on…

Back up anything you care about!

Before you start you’re going to want to BACK UP any important data on your unRAID. It goes without saying that during this process your data will not be protected by parity and is at risk. I am not responsible for any data loss incurred during this process.

I am moving away from unRAID and in order to keep track of which drive held data and which drive was parity etc I took a screenshot of my drive config page. I suggest you do the same.

Once you’ve got a mental picture of which drive goes where you’ll want to start preparing to move everything across. At this point, I installed Arch Linux to an SSD I had lying around.

The process of moving away from unRAID involves converting each of your drives from reiserfs to a somewhat more up to date and faster filesystem. There is some debate on this but based on results of testing XFS is marginally the fastest for lots of large files, such as media. Ext4 or BTRFS will also do you fine though but I chose XFS. This is a tedious process and took me about 3 days of constant transferring it total. One by one disk to disk transfer of 9tb of data takes a while.

Now you’re done here, we can move onto SnapRAID and AUFS configuration.

AUFS (Another Union File System) allows you to pool drives providing a single useful mount point across multiple drives. For it work you’ll need an AUFS compatible kernel, which is provided in the AUR. I’ll walk you through the steps to compile and install it on an Arch system.

NB (thanks to commenter Kryspy) – [With AUFS] If using the “mfs” switch in your AUFS config it would choose the disk with the most amount of free-space.  With the pmfs switch it will attempt to write to the parent disk where the folder exists first before writing to another disk.

You have just setup AUFS. Congratulations!

SnapRAID configuration is supremely simple. One config file is all you need. First, install snapraid from AUR using yaourt, packer or makepkg. 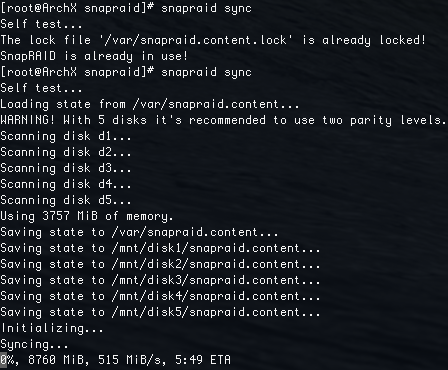 Here is my /etc/snapraid.conf file, edit it as you see fit – it is fairly self explanatory but you do need to make sure each drive is individually mounted in /etc/fstab.

The Other Stuff – Spin down, email notifications etc…

This will now not be included in this post, I think it belongs on its own so as to be separate from the AUFS knowledge.